RDO4 and “The Timeshare Village” 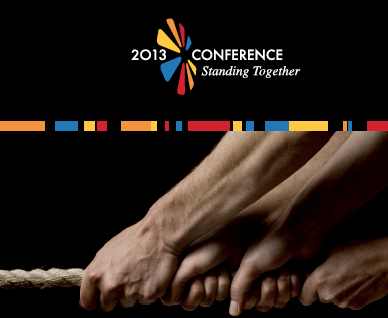 RDO4 and “The Timeshare Village”

It was over a drink (where else) at the Gala Dinner to mark the close of RDO4 in Gran Canaria on Tuesday night that Gordon Gurnik  (Global President, RCI) remarked that he really liked the community atmosphere that existed at the recent RDO conferences he had been to, but as he had said in his Panel session on stage, he was most impressed with the steps RDO had taken in the last 12 months to tackle the problems faced by the European industry, from legacy reputational issues to fraudulent resales and leisure credits. He felt that the industry, as represented by RDO, showed a real spirit of co-operation that accurately reflected this year’s theme of “Standing Together.” I liken it to “The Timeshare Village”.

RDO3 in London was always going to be a hard act to follow and we certainly had our concerns – over travel to GC for delegates – the Maltese had to fly to Munich and then back down to GC to get there – the fact that the weather, unlike London, was certainly going to tempt people out of the conference room (into the bars most probably) and that the Lopesan Baobab Hotel, whilst undeniably spectacular in design, was vast and getting lost wasn’t going to be difficult. Despite all these concerns, I think we pulled it off.

From Roy Sheppard’s opening moderator’s motivational that had us all singing Monty Python’s “Always look on the bright side of life”, panel discussions on the practical use of social media in our industry, Roy Peires’s story of the development of CLC World, a lively and colourful picture of how to deal with the emerging Russian market – to the Breakout Sessions on Sales and On-line Reputation Management, it all fell into place on the Monday and the evening was rounded off by a buffet supper hosted by RCI and II and staged by one of the many pools in the warm Canarian night.

Tuesday got-off to a roaring start with Geoff Ramm’s session on celebrity service that had the audience in stitches particularly over the Pizza Hut April Fool email. There was certainly something slightly incongruous about Geoff up on stage and around the hotel in a charcoal grey pin stripe 3 piece suit amongst all those holidaymakers in shorts and t-shirts!

It was good to hear from Kurt Scholl about his time at the helm of Hapimag, underlying this was the oft forgotten fact that with 140,000 members and 58 resorts in Europe they have to be up there with the biggest of the world players. The lively Mission Statement session demonstrated how far we have yet to go in making sure it is implemented by members and where is stands in the drive for a climate where the consumer always comes first and the panel session discussing new versus old marketing methods gave us all pause for thought. The morning was rounded off by a bravura (not sure even that word is strong enough!) performance from John Spence, as he took us on the roller coaster ride that is the Karma Group story – and what a story, this was a scaled down version of the presentation he gave recently to Yale Business School, where he demonstrated how he had broken practically every rule of business in the book and thrived – a true buccaneer or as Johnny Depp once memorably described buccaneers in Pirates of the Caribbean “a real scallywag”! We ended the conference with a look at the industry present and future which is where Gordon made those remarks, followed by a great session from Steve Clarke on how to approach your business and new opportunities to secure the maximum success.

The closing dinner was an enjoyable affair with a cake, presents and a round of Happy Birthday for Sue McNicol on her 50th  (she has served 17 years in the industry and is still moderately sane) and as I struggled to get a taxi for the airport at 4.30 in the morning with an afternoon meeting to get to in London, some were still partying (Miss Yeaman included) and they may well still be doing so as I write this – Nikkie is however back at her desk you will be pleased to know!

We are back in London next year (18 September 2014), no doubt the weather will not be the 30 plus degrees centigrade we had in GC AND we have to try to produce an even better line-up than this year – so the circus folds its tents and moves on – the timeshare village goes about its business, refreshed, re-vitalised and we hope, appreciating a little more how standing and working together, we can create an even better industry here in Europe. See you in London.

Since writing this on the flight home, I think most of us have heard the sad news of Wendy Chapman’s accident in the early hours of Wednesday. Our thoughts and prayers go out to Wendy and Frank at this difficult time and we all look forward to a speedy recovery for her.

What a difference a year makes………..