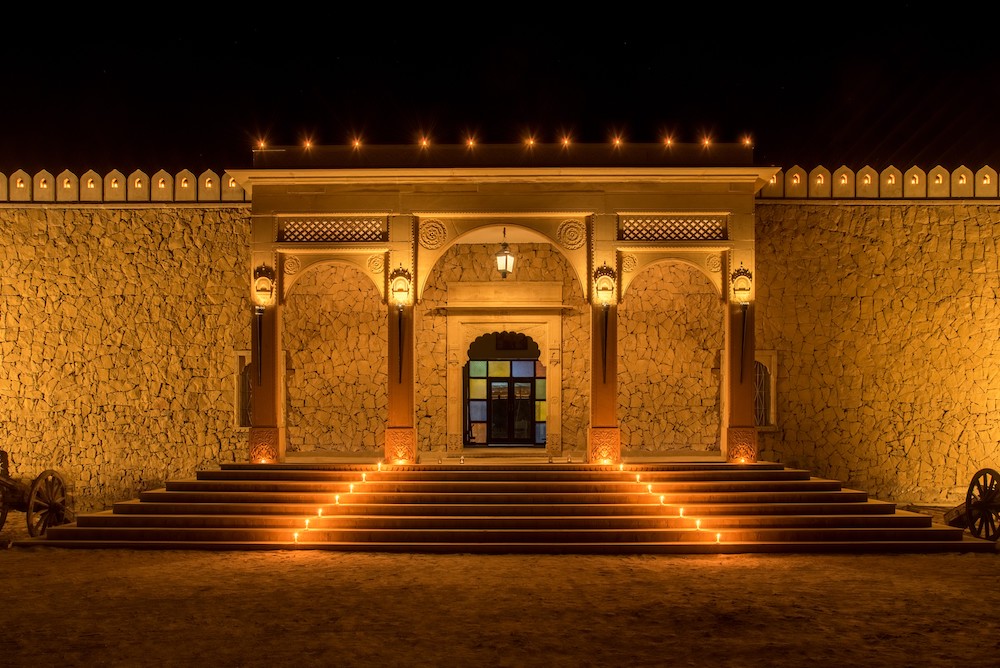 A number of exciting activities on offer at Karma Golden Camp include dune-safaris, para-sailing, para-motor-gliding and quad biking in an incomparable desert setting. Or for less adrenaline and more relaxation, enjoy a laid-back camel safari, cocktails at sunset or star gazing in the magnificent desert night sky – sure to impress with zero light pollution.  An unforgettable romantic experience, the hotel also offers private dinners among the dunes entertained by Rajasthani folk dancers and singers.

Close to the vibrant colours of Jaisalmer, with its famous fort and palaces, the airport is easily accessible from Karma Golden Camp, approximately 45 minutes drive away, or for road trip fans, fly to Jodhpur and enjoy a 4.5 hour adventurous drive

Other nearby highlights include:

A UNESCO World Heritage Site and one of the largest forts in the world, Jaisalmer Fort is also the second oldest fort in Rajasthan, built in 1156 AD where it stood at the crossroads of important trade routes (including the ancient Silk road). Known as a ‘living fort’, a quarter of the city’s population still live within the fort.

17km west of Jaisalmer, this once prosperous village is now long abandoned and maintained by The Archaeological Society of India as a heritage site. According to a popularly held notion, the village is inhabited by ghosts.

Approximately 42 km from Jaisalmer in the midst of the Thar Desert, these sand dunes are amongst the most famous in Rajasthan and a popular spot for desert safaris and camel tours.

One of the largest national parks, covering an area of 3162 km², the Desert National Park is a haven for migratory and resident birds of the desert. Many eagles, harriers, falcons, buzzards, kestrel and vultures are spotted here.

The addition of Karma Golden Camp brings Karma Group’s impressive portfolio to over 40 properties, with 36 currently operating in 11 countries, six under development and more resorts to be announced