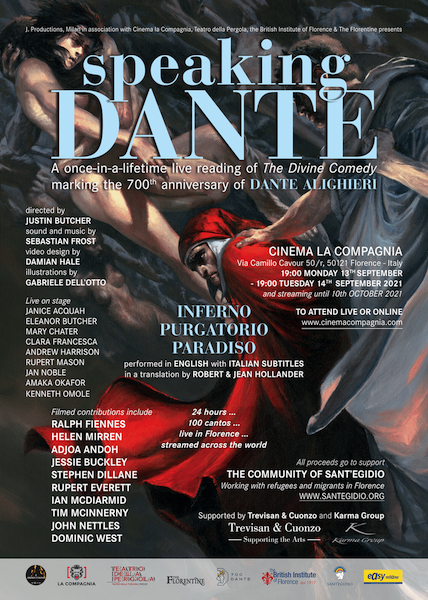 Taking place in Florence, Italy at Cinema la Compagnia over 24 hours from 19:00 (Italy time) on 13th September 2021 until 19:00 (Italy) on 14th September 2021 and streamed online worldwide, the live reading of The Divine Comedy will mark the 700th anniversary of Dante’s death and all proceeds will be entirely donated to the Community of Sant’Egidio in Florence which deals with the reception of migrants and refugees.

This is the first time Dante’s astonishing legacy and his poem’s enduring power have been celebrated with a 24-hour marathon live reading in Florence of the whole of the Divine Comedy in the acclaimed English translation by Robert & Jean Hollander. Curated by Milan theatre producer Julia Holden, in collaboration with award-winning UK playwright Justin Butcher.

John Spence, Chairman & Founder of Karma Group which includes the exquisite Karma Borgo di Colleoli in the heart of Tuscany, commented “Florence plays host to a once in a lifetime production which Karma Group, a brand with continued commitment to philanthropy – and to world class entertainment, is proud to sponsor. This real world meets virtual production is a momentous cultural event and in aid of a charity doing vital work for refugees, an experience Dante himself encountered during his lifetime

Online streaming is available live and until 24th September: https://www.mymovies.it/ondemand/piucompagnia/movie/9278-speaking-dante/