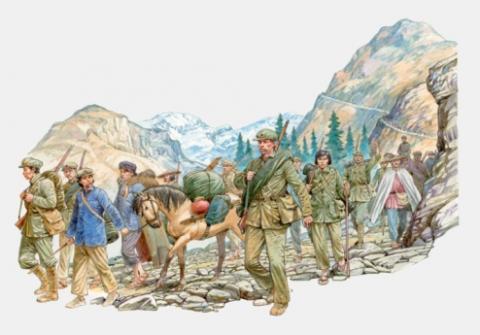 In October 1934, it is claimed that Chairman Mao as he was to become, was one of two eventual leaders, who lead what was then the Red Army from the south of China, North and West over some of the most difficult terrain in China to re-group and escape almost certain defeat and destruction at the hands of the nationalists, under General Chiang-khai shek. The journey covered some 9000 kilometres and took 367 days or thereabouts. It became known in Chinese history as “The Long March” and was reputed to be the turning point in the fortunes of the Chinese Communist Party.

Apologies for the history lesson, and I am sure most of you knew this anyway. I was thinking about this as an analogy as I reflected on TATOC’s Annual Conference, which was held over last weekend. Preceding that, we had held the first joint RDO/TATOC Seminar for sold-out resorts, also at Warrington, and I think that all of us who were involved in the organisation, felt that it had probably gone better than we hoped and there was indeed a high degree of interest amongst those resorts who had sent representatives to the event.

Reflecting on that, there was a consensus that more work was needed, that we would need to hold another such event and follow up on this. There seemed to be a definite desire by committees to look at their long-term future and analyse what was needed to help them deal with the ageing demographic issue. So a lot to be done there and very much a work in progress.

This was not however where the Long March analogy came in. It came to me after the “Gloves off” session at the TATOC Conference, when the first question was why RDO and TATOC had not been merged (I paraphrase). I was not on the platform for this, so could listen to the debate from the floor as it were. The analogy seemed to be that in South Africa the interests of the owners and developers had been merged and likewise in the US and therefore Europe was lagging behind.

The TATOC and RDO Chairmen put up some good arguments on the progress we had made  – the Panel of Experts Report that led to exit strategies being put in place by all RDO members, is probably the most obvious example, but seemed to have been forgotten by delegates. It is easy to be wise after the event, but listening to Harry Taylor, I was struck by how hard a balancing act TATOC has. They are a consumer organisation and as part of that they also represent owners committees on sold out resorts. That is a difficult row to hoe as you are going to have conflicting interests. Harry, with I suspect some scepticism from his members, started working with me shortly after I joined RDO (then OTE) from 2008 onwards, to bring the two organisations closer together and to start working on areas of mutual interest. All RDO had to do was shift its focus somewhat away from lobbying to the needs of the owners and consumers. Not only that, TATOC has had to convince government bodies that by working with the industry as represented by RDO, TATOC had not ceased to be a “consumers organisation” and had not fallen into the pockets of the industry – i.e. had sold out to RDO. Not an easy task as Civil Servants in Whitehall and Brussels rarely come across a situation where the two sides work together as closely as we do and let’s be clear, there are plenty on the side-lines with other interests prepared to make those allegations, the late Sandy Grey for one.

So where is the analogy I hear you cry – assuming you have lasted to the end of this piece?!  For those who were critical yesterday of the pace of progress towards this meshing of interests, this rapprochement, this “Anschluss” (sorry more 20th Century history), I think you do need to be a little patient. Events are moving faster both in London and Brussels with the review of the directive – we do have a “Long March” ahead of us but I do believe the leadership of both organisations are up for it, but members of both organisations will have to leave some of this to the judgment of those at the coal face – “Rome wasn’t built in a day” as they say! (The phrase being first coined by a 12th century cleric at the court of the Count of Flanders).

I should add as a postscript, that arising put of that session, we now have a comprehensive list of action points for attention between now and next year’s conference, so we also have a road map for our long march!

Around The World In 80 Days… An Adventure in Timeshare