From Aha to Kerching! 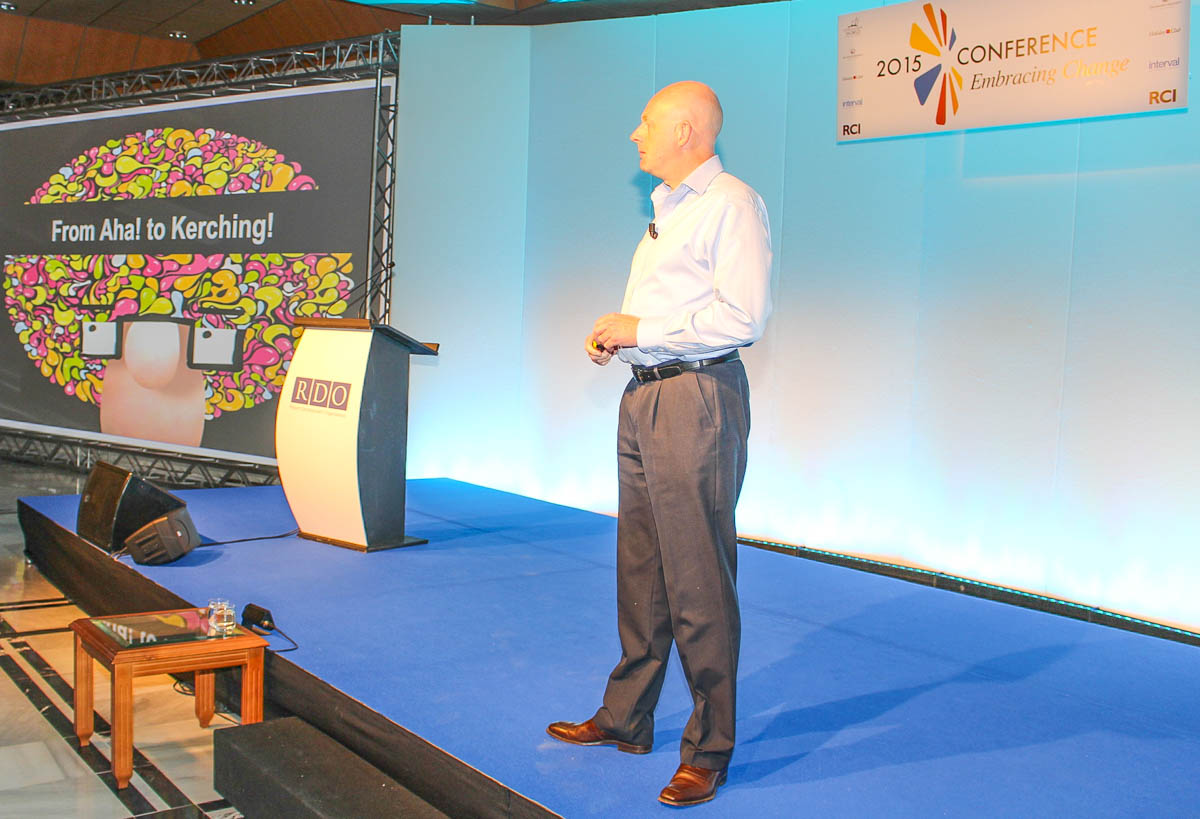 From Aha to Kerching!

The title of Guy Browning’s presentation on Day 2 of RDO6 at the Don Carlos Hotel in Marbella, Spain, somehow sums up this year’s conference – more on that presentation later. This year I think those of us on the Conference working group were seriously concerned as to whether we could produce an event that exceeded the standard reached in London last year at RDO5.

We need not have been so worried. From Michael Jackson’s (the other one) opening, which so accurately reflected the theme for this year of “Embracing Change” and taught us how not to over-complicate things, to resist the negativity in our thinking and identify what is important to our businesses. Memorable also for the response – when asked whether he thought his children would buy timeshare he replied, “they would rather nail their heads to a burning building…” a message that would come back for us to consider as the conference progressed.

“ Good, Bad and avoid turning Ugly” was the first time we had asked 3 timeshare owners to take the stage and talk about their experiences as owners. This was from my point of view a sobering and enlightening experience. From Winnie Boothby, who at one time had owned 11 timeshare weeks in total – she is reducing this number now as she is a sprightly 80 something, to Tina Bamber who had a child with difficulties that prevented her booking her exchange early, to Martin Saunders, whose family have not exactly had a trouble-free experience with their timeshare, but nonetheless could still be enthusiastic and positive about the product they owned. Whilst it may have come as no surprise to delegates that the issues they raised as owners were the ones we knew were a problem – escalating maintenance fees, over-promising on sales and difficulties obtaining exchange, the one that probably caused as much concern and was not one often heard was the huge variation in quality of resorts on exchange,  and in fact it was the poor quality of an exchange resort that had sent Martin and his family to buy a penthouse week at Anfi that very day they arrived at one such poor quality resort on Gran Canaria – a resort he remains enthusiastic about  to this day. It was a sobering session and I think reminded all of us as about some of the key issues the industry faces at this time.

One of the aspects of that session and indeed others was of course the age demographic of timeshare owners and the need to reach out to new generations.

There was a great session moderated by DRI’s (Diamond Resorts International) Steven Dow bringing together two millennials employed by First Names Group and DRI respectively (Chris Kissack and Steven Mercer), who were able to give us an insight into what motivated them and how the industry should be looking at this generation in terms of future timeshare owners and would they be timeshare owners if Michael Jackson was right??!

An important by-product of this session has to be that like ARDA, RDO needs to and hopefully will set up its own “Young Professionals Group,” to foster and bring on the next generation of leaders and executives in the industry. It would be great to see more younger delegates from our members next year as we provided discounted fees  for them this year and will I suspect do so again next. What about members sending their best performing young managers to the conference next year as a reward?

Related to the same topic, we had a presentation on the social media project “timetoshare” from Flagship’s Jackie Murphy, along with a discussion group of how it could be implemented and supported by 3 of the industry’s leading women executives (Jodi Darnbrook, Diana Aitchison and Justine Banister-Day from Club Olympus, Silverpoint and Pearly Grey respectively). The Board will be considering this proposal at its November meeting, but undoubtedly it had resonance in the conference amongst delegates.

There were a host of other sessions I haven’t the space to mention here, from Debbie Wosskow’s exposition on the rise of the Sharing Economy in the UK to Richard Newman’s “Walk the Talk” on how your body language affects your business. All this and a bravura performance from Club La Costa’s Eugene Miskelly on the recent Spanish Supreme Court Rulings, left delegates with an over-flowing basket of “ take aways” – something the planning group always needs to consider when looking at each session to see whether it provides this.

So why “Aha to Kerching”? Mainly because there were undoubtedly “Aha “ moments in those sessions where you realised the importance of points being made and indeed “Kerching” ones when it became apparent how you could add value to your business. Did Guy Browning, who opened our later starting 2nd Day this year, provide us with take-aways? Not sure, but to be honest most of us had tears streaming down our faces by the end of the session – since the advent of RDO1 I think I can say this was probably the funniest presentation we have had – ever, and there has been some stiff competition over the past 6 years. For those in the know the consultancy he claims he runs – “Smokehouse” is the same “Smokehouse PLC” featured in the very funny BBC Radio 4 comedy “Weak at the Top”, which ran for a number of series in 2006/7 and ironically is now back on Radio 4 Extra and is of course written by the very same Guy Browning and is a very funny spoof on the corporate world.

The other worry with this conference is that we don’t get the balance right between industry and general business topics. – I think we managed it this year and for those who complain about the cost of attendance, I would just add that to see any one of those key speakers this year, you would probably have had to pay the equivalent of the whole delegate fee for that one session! Food for thought.

My thanks to all those who attended and of course for the organising team, our moderator – Robin Mills and the sponsors. My commiserations to those who didn’t or couldn’t make it – you missed 2 great days and of course the social events and weather were both just right. Put London 13 to 15th September 2016 in your diary now in order not to be disappointed!